Debugging Kubernetes Applications on the Fly

Over the recent years, software development organizations have seen a major shift in where they build and run their applications. Teams have transitioned from building applications that run exclusively on-prem to microservices applications that are built to run natively in the cloud. This shift gives businesses more flexibility as well as quick and easy access to enterprise services without the need to host costly applications and infrastructure. As part of this migration, many organizations have adopted the use of containers which aim to solve many issues developers have typically faced in portability and scalability of applications. Kubernetes has quickly become the defacto standard for container orchestration when building modern cloud native applications.

While the power of cloud native and Kubernetes based technologies promises organizations the ability to build software quickly and scale effortlessly, debugging these Kubernetes based applications can often prove challenging.

One of the biggest challenges with debugging applications built to run in Kubernetes is that local debugging is a major obstacle for developers. While there are Kubernetes solutions like Minikube which allow you to spin up clusters locally on your laptop or desktop, the fact is that there are oftentimes major differences between Kubernetes platforms that make such an approach impractical. For example, if you’ve built an application and are running it in production in Google Cloud’s managed Kubernetes offering GKE, local testing in Minikube may be more trouble than it’s worth. Anytime you’re debugging, you ideally want an environment which mirrors your production environment as closely as possible.

Many developers choose to utilize local debugging options such as Docker compose, which is a tool that allows the running of multi-container Docker applications. This approach allows developers to define a YAML file containing information needed to run the relevant services making up the application.  While this approach can often work well for local debugging, there are security and infrastructure specific conditions which might not be reproducible in a Docker compose environment when your production environment is Kubernetes. There are solutions which are being developed that aim to make local development easier such as telepresence but these require that you proxy into the network where Kubernetes is running, which could be a security risk.

Looking beyond the infrastructure itself, Kubernetes has many new commands and technical areas to become familiar with in order to effectively debug the services you develop. Debugging applications running in Kubernetes pods can be inherently difficult due to the fact that pods are ephemeral in nature and can be spun down anytime based on the Kubernetes scheduler (yes, even if you are in the middle of debugging one of them).

Looking at the debugging challenges above, it’s clear that there is room for improvement and potentially a better approach. One such approach, enabled by Rookout, allows for debugging applications live in their native environments by allowing developers to add “virtual” log lines on the fly and collect snapshots of data from those running applications. By simply placing a “Non-breaking breakpoint” on a line of code, developers can extract information typically only found in a local debugger from their applications without ever stopping them or needing to redeploy.

With this approach, developers can effectively debug their code by decoupling the code itself from the underlying infrastructure where it’s running. This allows teams developing applications for Kubernetes to focus on what their code is doing when a defect happens. Teams spend far too much time trying to reproduce defects in staging or pre-prod environments where attempts are made as much as possible to simulate the configuration of production environments. While this can be possible, it’s far more effective to debug and collect relevant data from the same environment where the defect occurs. Having a real time production grade debugging tool in place can dramatically improve the understandability of the code developers both write and maintain.

One of the best ways of understanding how real time debugging works is to take a look at a hands-on example. In this section, we will look at the following:

To start, let’s take a look at how the Rookout SDK is configured within an application.  This example will use a To-Do application written in Python.

This is how you import the rook package into your application and tell it to start processing.  The SDK should be started just before the application begins executing.

That’s all that is required to configure the Rookout SDK to work within an application.  In short, the Rookout SDK is deployed as a dependency of your application running side by side with your codebase. In the next section, we will take a look at deploying the application to a Kubernetes cluster.

Now, let’s deploy the application to a Kubernetes cluster.

From here you should be able to access the To-Do application front end running in the Kubernetes cluster.

Finally, we’re ready to debug the application while it’s running on the fly!

Note that your source code never leaves your network and is never viewable by Rookout: 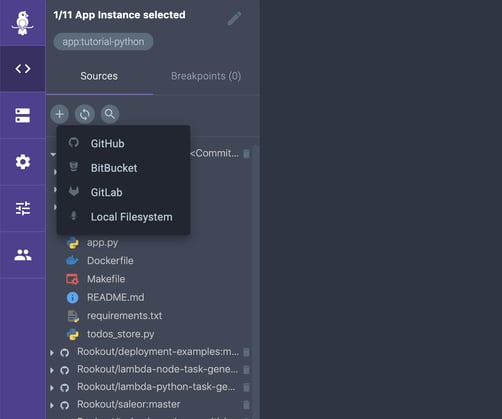 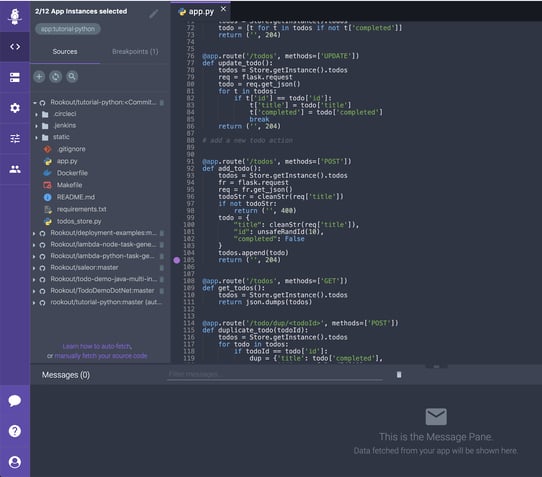 Tying it all Together

And there you have it. We’ve shown how you can dynamically debug a live application running in a Kubernetes cluster just like you would with an application running locally tied to a debugger in an IDE. Just because you’re adopting new and cutting edge technologies that may have their own set of debugging challenges, it doesn’t mean that your development needs to slow down. Adopting new technologies that give deeper insight into what’s happening with running applications while they’re running in their native environments helps to increase developer velocity and improves the mean time to repair (MTTR) of often hard to reproduce issues.  This in turn increases the overall understandability and maintainability of mission critical applications.